We met with our BikeStyle Tours group at the Milan Malpensa airport and loaded up the bus to begin our transfer to Lake Viverone, our home for the next three nights.

Somehow, Duane and I managed to land in the same seats we had on our Tour de France trip. Creatures of habit, I guess! Go figure!

As we traveled the day, in our Aussie tourmates’ dialect, became more and more “average” (overcast); and by the time we completed our pit stop, the rain had begun.

And rain it did. Upon arrival, we put our bikes together under a covered walkway. Duane was taking a while to get down, so I set to putting my bike together on my own…. Yes, there is a first time for just about everything! I’m proud to say that I got her all assembled without asking for any help. I think Duane was so surprised that he aired up my tires for me just to feel needed. 😉

Once the bikes were assembled, there wasn’t much to do other than don or knicks (Aussie for bike kit, or clothes) and hope that the rain would let up. Wishful thinking for the most part, though it did lighten up a smidge as we were starting. Before we knew it, we were off for our ride around the Lago di  Viverone.

Now, for this Texas gal that hasn’t been out much in the rain, this was an interesting day. The rain was bad enough that you had to decide if getting smacked in the face by water thrown up by the person in front of you was worth staying with the group. Definitely my wettest day on the bike by far! Looks like it’s continuing weather pattern–there’s 70% and greater chance of rain every day for the duration of the trip! Ack!

Today was a short and simple ride to get the travel lead out of our system. And despite the rain, it really was a beautiful ride. We were on narrow winding roads that took us through vineyards and freshly plowed fields (so freshly plowed, in fact, you could taste the dung!). I’m happy to say that I made it up–and down–all the hills.

Here’s the profile of today’s ride.

And here’s me at a fork in the road.

I’m looking forward to the getting to know our fellow travelers and hitting a big mountain tomorrow. Fingers crossed I’ll get over my reservations about descents, particularly in the wet.

It’s Time to Make a Splash 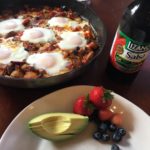 Three Days in the Crested Butte Backcountry with Irwin Guides