Burn the Floor is Smokin’ Hot!

Duane and I did something new this year. We purchased seasons tickets for the Dallas Summer Musical series.

I’ll admit, the first show, Burn the Floor, was the show we were the most dubious about. Touted as “Ballroom. Reinvented.” (or in Duane’s terms, kind of like Dancing with the Stars meets Broadway), this show is different than what we had ever experienced in the musical genre.

By dubious, I mean we weren’t quite sure what to expect. We’ve not been to a show at the Music Hall at Fair Park we’ve not enjoyed, so we figured the show had a fighting chance.

Instead of being a deal-breaker for the series, the show ended up being the deal-maker. We figured that we probably wouldn’t go unless we had the tickets.

Boy, am I glad we made that decision! (And my girlfriend who went with me was equally glad Duane couldn’t go!)

Both my friend and I couldn’t help but smile incredulously at the show unfolding before our eyes! I’m quite certain that enrollment in ballroom dance classes will see an increase in popularity following this show!

The show runs through April 17, 2011 at the Music Hall at Fair Park. If you have the opportunity to see the show here or at a different venue, you’ll definitely want to take the advice of critics: “Don’t think twice – JUST GO!”

Have you been to the show? What did you think? 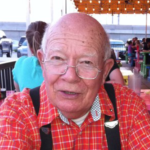