As I was dusting out shelves in the Journey Monkey blog posts and mulling over what direction this blog (and I) should evolve in 2017, I came across this post that I started way back in 2011. And while the story may be old, its essence, conveyed in the first line, rings through no matter the time. The time has come to clean off the cobwebs, do a copy edit, and post the darn thing!

Eleanor Roosevelt coined a phrase that I like to live by: “Do something every day that scares you!”

It’s interesting that the little inkling of hope buried deep in your heart can be amongst the most terrifying of things. On Sunday, April 17, 2011 I knocked a doozie off my list with playtri.com’s King Tut Triathlon.

You see, doing a triathlon (of any distance) had been on my bucket list for going on ten years. I’d talked about it, gotten a season pass at the Denton Natatorium several times, even convinced Duane to help me pick out a suitable bike! I knew in my heart that I would enjoy triathlon loooong before my brain could even fathom it.

Being a distance runner, the endurance aspect wasn’t the intimidating factor. Neither was the swimming; after all, what runner doesn’t need a sport for cross training? I took swimming lessons up until the point that I wouldn’t drown if I fell of the family bass boat as we zipped across the lake and I’ve been a scuba diver for more than half my life. My mental hurdle was getting on that darn bicycle!

You see, when I was in the first grade, my bike got hit by a car when I was on it. I was unscathed, but my pretty pink bike with the white banana seat and tassels streaming from the handle bars ended up with a very crooked front wheel.

My mother, who looked on as the car struck me, barely let me get my bike to the house before she had me off of it and had my father buryng it in the recesses of the tool shed where I was not allowed to enter. And that was that for my youthful riding career!

That fateful few seconds grew into an incredibly unreasonable fear that lead to white knuckle experiences Every. Single. Time. I got on a bike. It became easier and easier to psych myself out—cars passing, groups of people, busy country highways with little or no shoulder, gravel, trees—you name it, I could invent an excuse that further engrained the fear.

While on a couples vacation with some good friends to San Francisco, Duane and my friends convinced me that we needed to rent bikes for a day and ride across the San Francisco Bridge.

For someone who would have a panic attack within the first 100 yards of getting on the bike, it was a pretty huge endeavor. I did it and I kind of enjoyed it once I dug past the white knuckles, barely being able to breath, and the fervent hope that I would not crash and somehow manage to die doing something that people did every day.

Fast forward a few months, I got a couple of random text messages with cryptic questions from my better half about the whereabouts of my wetsuit, how thick it was, what size it was, my weight, how fast I ran. Random questions to be sure, but not so crazy that I fretted about them. He’d recently gotten into doing triathlons, so we’d had conversations about that kind of stuff…related to him.

A few days later, Duane walked in with a box and a bucket and had a sneaky grin on his face.

He announced that he was tired of me saying that I was too scared to ride a bike and could never do a triathlon and that he had signed me up for PlayTri’s My First Tri division of their King Tut Triathlon. In two days.

In the box was a rented wetsuit. In the bucket was everything I needed for the race and transition including a pair of cycling shoes, with cleats to go with the clipless pedals he had taken the liberty to put on my bike.

“It’ll be easy,” he said… “Only a 200 yard swim in a community lake (formerly a stock tank before the community grew up around it!), a 6 mile bike ride that would be in a protected lane, and a 2 mile run. Besides, I know you’ll love it.” 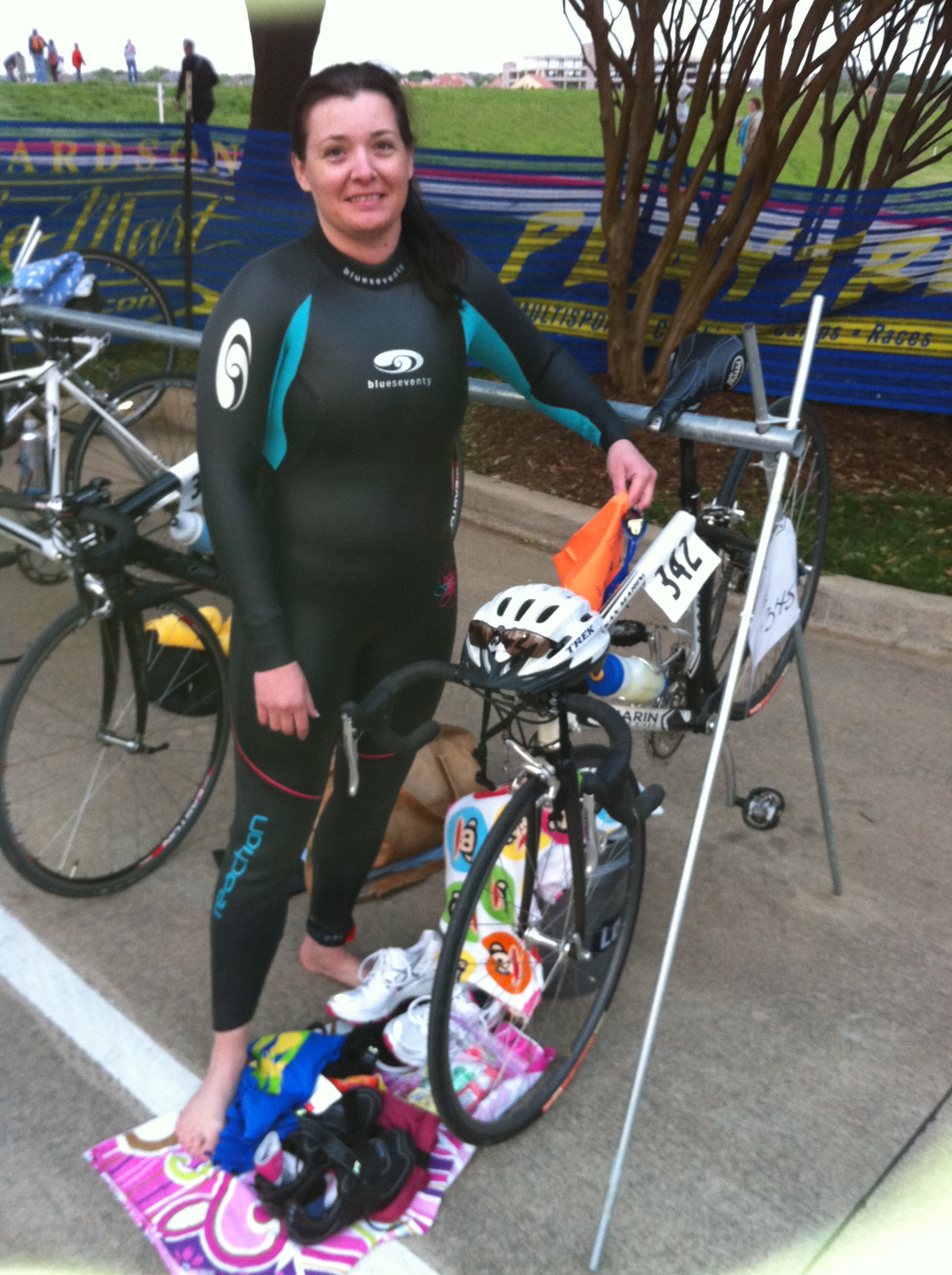 I took a nice cleansing breath and said OK. I got a 10 minute lesson on how to clip in and out of the pedals and was given a very high level introduction of how goggles, swim caps, swim starts, transitions, and bike mount/dismount lines worked.

I jumped in the water with 5-10 other nervous ladies, heard the whistle blow and started my swim. I use the term “swim” loosely as I was completely hypoxic within about four strokes and had to dog paddle my way across this pond that I could almost throw a rock across. Nothing was overly remarkable about my transition, other than maybe how long it was. I didn’t fall getting onto the bike, but it did take me the first 2 miles to finally get clipped in. Every terrified cyclist wants to go uphill with one foot shooting off to the side with each pedal stroke. (Source: electric bike for sale UK)

Fortunately, it was early enough in the day that there was very little traffic and we had a full lane. As I pulled into the park, I marveled at how much fun the bike ride was and was ever so thankful I was able to unclip from the pedal and didn’t fall over. My relief at getting over what I thought was going to be the worst leg of the day was short lived. You see, a stuffy ear that I had attributed to allergies decided it was done with me and I had the pleasure of completing the hilly run with an ear so excruciatingly painful that I wanted to “mountains of the moon” myself to end the misery. (I ended up taking a trip to the emergency room later that day to get it fixed.)

It took me over an hour, but I finished. As with so much of what we do, it wasn’t perfect, it wasn’t easy, and I didn’t get to the end as I expected. In a hilarious twist of fate, the bike leg ended up being my best leg.

And I wanted more.

It wasn’t until 2012 that I would revisit triathlons as I spent the rest of 2011 getting over that pesky earache (12 weeks!!!) and training to do a sub 5-hour marathon. Through the efforts, handholding, and ecouragement of my awesome coach and supportive teammates at Triple Threat Tough, I’ve been doing triathlons ever since. I even became an Ironman when I completed the Ironman Louisville 140.6 in 2015. I’m not the fastest triathlete, though I have earned a few age-group trophies.

Most people who know me have heard this story. In fact, over the last (eh-hum) 6 years I’ve told it enough times that, I’ve become weary of it and hesitate to tell it one more time.

While I use the fact that I’ve told this story a few times as the reason I’ve not published it, the real excuses fall partially (mostly) due to work and travel and life getting in the way as it so often does. I started enough other posts that this one ended up hidden on the next page. But an underlying fear of doing something with all my heart is what allowed those excuses to thrive. Just as it was really much simpler to be afraid of the bicycle than to ride it, it has been much simpler to be afraid of putting my story out there than to do it. Easier to figure out reasons not to do than to do.

But here we are at the beginning of a new year. A time to begin anew, to set goals and dream new dreams, or to pull out something that’s been tucked away in your heart and reshape it. To do what Henry David Thoreau recommends, “to go confidently in the direction of your dreams.” And sometimes, to be able to go in the direction of the dream that has been tucked into your heart for safekeeping, you have to do something that scares you.

For me, today, that scary thing is to hit the publish button.

So for the near future, dear reader, my intent is to go confidently in the direction of my dream of becoming the travel writer I’ve always wanted to be-as opposed to the magazine feature editor/writer, newsletter writer, or business blogger that I’ve been for the past 15 years (insert a very dramatic eye roll at myself).

And whether I publish only this one anecdote this year or 1000, with each of the publish button, I’ll be channeling my inner Eleanor Roosevelt and doing something that scares me.

And if my (our) stories are of no interest or of value to you, that’s OK. Your journey is not our journey. And your monkeys are not our monkeys. Unless, of course, we happen to be on the same trip. 😉 At which point, we’ll have a good time figuring it out together.

What about you, where is your heart leading you? What are you going to do this year that scares you?